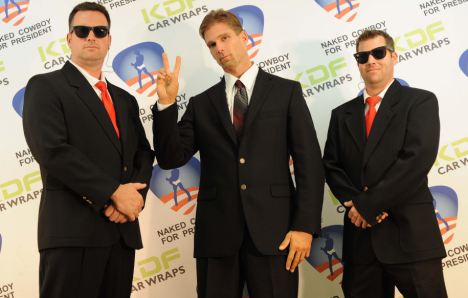 Yes, kiddies, our old friend the Naked Cowboy is in the news again. This time he is not suing anyone for using his (not so) intellectual property in their advertising. He has actually announced his candidacy for president.

He held his press conference dressed in a suit. We are supposed to recognize him with his clothes on why?

And for what party would our old friend be running… you guessed it, the Tea(bag) Party. Oh the countless Sarah Palin jokes we could spin from this one!

So let’s see, “Sir, what are your qualifications?” “Well, I am able to withstand extreme temperatures in my skivvies”. Yup, that’s all I need in a national leader, how about you? I have to admit I sort of like his logo and the Blues Bros. pose in this picture.

He will be keeping company with the likes of a Delaware candidate who assured us – in a damn TV commercial – that she is not a witch. And the raving lunatic thug from Buffalo who has built almost his entire candidacy on anger and threats and thinks that sending racist and sexist emails to his friends is ok, as long as they are not public. Huh?

Although I do find this all amusing on some level, does it concern anyone else that political campaigns have reached a new level of circus?

Or should I say rodeo.

Traveling to another dimension

If you have wondered where I have been these past few days, I have traveled to another dimension. One that I rarely visit.

Yes, I know it is hard to picture me there. And to be perfectly honest I had a functioning blackberry so I could monitor email, blog comments, twitter and Facebook.But I chose to not participate for a few days.

It was Fire Island; synonymous with sea air, alcohol and dear friends that prompted my desire to just spectate. The only thing missing was a repeat performance from the cucumber plant that we witnessed last year.

Funny, I ran into friends on the beach who asked me what I was doing going for a walk and not blogging with the breaking news about Palin going on. I will leave her for another day. I only hope my Palin condom just went up in value with this new twist of the bizarre.

Have no fear, though. I shot over 100 images. I think this one is my fave. I will not be so lame as to make this a ‘where’s Amy?’ shot, because it is obvious. But this image captures the amazing place that I was. Both figuratively and literally.

Thank you Sam and Katie, for hosting yet another perfect weekend at the beach. This shot illustrates the inside, outside, sky, sea, sand, trees, architectural wonder that they call their beach home.

Don’t I blend in nicely with the environment?

Haven’t had enough of me yet? You can also read me at 50-Something Moms Blog. For photo enthusiasts, visit Leaving the zip code, photos from outside the comfort zone

This could be the best thing that happened to the Obama campaign yet.The Masked Avengers of CKOI, Audette and Sebastien Trudel, staged this fake call from ‘Nicolas Sarkozy’ to Palin and she was completely clueless even as they ratcheted up the absurdities. “I wanted to see how (Palin) was on an intellectual level,” Audette said.

Ben Smith of Politico was one of the first to pick this up from The Canadian Press.

A candid peak into how she carries herself with a foreign president will surely make the hairs on the back of  your neck stand on end.

When she gets on the phone and mistakes the assistant for Sarkozy: “It’s not him yet Bexi, I always do that.”

When discussing hunting, which Audette refers to as his ‘love for killing animals’ Palin replies “We can have a lot of fun together while we’re getting work done. We could kill two birds with one stone.” At which point Audette makes a joke about not bringing Cheney and Palin offers up the fact that she is s good shot.

He mentions his special adviser to the U.S. Johnny Hallyday who is actually a french singer and actor, singer Stef Carse as Canada’s prime minister and Quebec comedian and radio host Richard Z. Sirois as the provincial premier. Don’t get me wrong, I don’t know any of these guys, or the correct names, but I AM NOT FRIGGIN RUNNING FOR VICE PRESIDENT. After all, can’t she see Canada from Alaska?

Personally, I was thrilled that she did not offer up a Sarah Palin condom.

Haven’t had enough of me yet? You can also read me at Mid-Century Modern Moms where they are celebrating their 1 year blogaversary. And at 50-Something Moms Blog… Poor is the New Rich and There is no Hair in Team .

Time to Cry Tuesday – Let the Daughters Speak Out

I first saw this video on PunditMom, a fellow blogger at 50-Something Moms blog. (I simply love her daily commentary).

Sorry email subscribers, you probably won’t be able to view this video without going online to the blog, but I urge you to do so. This is very powerful.

Hey, I love a good Sarah Palin Condom or an SNL sketch just like the rest of them, but my fear is that we have all gotten so caught up with Joe the Plumber, hockey moms, mavericks and you betcha’s that we are mired in the satire and don’t stop to really consider the ramifications. I had a friend say the other day that now is not the time to be a one-issue voter. That our country is in such turmoil we need to look outside our personal pet issues and vote for what is best for this country. Thankfully for me, both of those ideas go hand in hand.

If you have a daughter, this one will give you chills. If you are a women, it will make you feel proud of the generation that is speaking out in this piece. Hey, and if you are a (straight) guy, there is a good chance you can ‘get you some’ if you send this to your significant other. (sorry, even Time to Cry Tuesday needs a little levity). 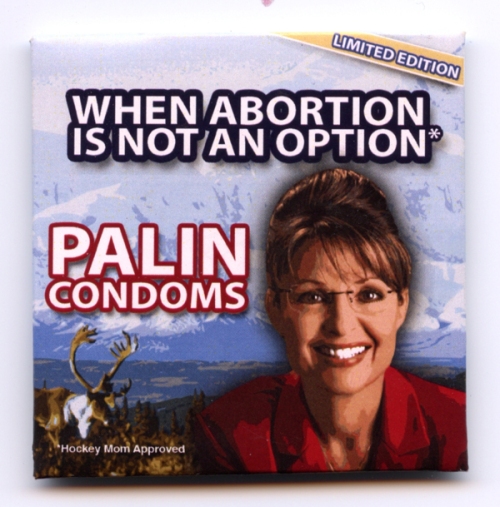 …or why you should always have $5 in your pocket in Times Square.

I kid you not, my friends. Oh no, did I just say ‘my friends’? Help, I think my brain has been infiltrated by election pop culture. Um, do you think? This is my 4th friggin’ consecutive post on this drivel. I can’t help it, everyday gets more amusing.

Back to the story of the condom. I was walking from Penn Station to meet Gary and some friends for dinner on 56th Street. For those who know NY, this is a walk through the belly of the beast known as Times Square. At rush hour! This is about as out of the basement as you can get.

Overstimulation is an underestimation.

I was getting into the bob and weave of the ebb and flow of bodies and traffic, street noises and meat-on-a-stick smells, when all of the sudden I hear:

What? Are you KIDDING me? And there it was again, coming from another place. And then another. There must have been a half a dozen young men carrying boxes of condoms. A whole swarm of condom hawkers. (BTW, they also had Obama and McCain – those are simply not funny).

But Palin condoms? With the tagline “When abortion is not an option”. That is absolutely hysterical.

Here is the best part. A young french man came up to the vendor as I was buying one.

French Man: what are theez?

French Man: Ugh! I wooood not put my deeeek in one of theez.

And this is when I knew for sure that the humor gods had smiled down upon me once again and I could live another day!

(fyi, you can purchase them here, but they are cheaper on the street if you happen to be in Times Square).

Also, my candidate paper dolls came today. They are so amazing I must do a follow-up post on them. Just a preview… first page, they are in their underwear!

Was this just about putting any skirt in the seat? 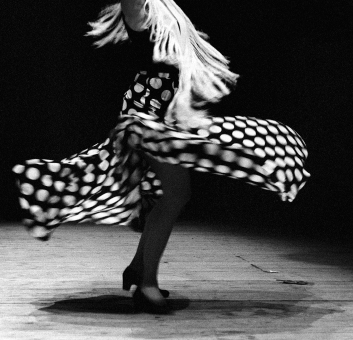 I will be shamelessly self-promoting my new photo blog, leaving the zip code, here from now on. You won’t be disappointed, I promise. Let’s see if some of you will take the ‘submit’ challenge. And today you can read me at Mid-Century Modern Moms as well.

Perhaps this is an appropriate Time to Cry Tuesday post (late and confused from the holiday weekend).

Not one to get into the political fray all that often, I could not help but do a short post about the Sarah Palin choice. I am saddened by what I think is an insult not only to the women of this country, but the people of this country. I started this post hours after the announcement was made but was hesitant to continue. Now that the theatre of the absurd has unfolded it just can’t go unmentioned here. (with my sarcastic twist, of course). This does not contain any new, groundbreaking commentary, but it may make you laugh (a little) while you cry.

I am not claiming to know much about her (scary detail #1) but I certainly do not feel all warm and fuzzy about her being one heartbeat away from the presidency (scary detail #2). What really freaks me out is that McCain would think he could capture 18 million Hillary supporters with a pro-lifer (scary detail # 3,4 and 5).

Another great quality I want in my VP: card carrying member of the NRA.

Oh, and now the pregnant teenage daughter. His people KNEW about this and were still ok?!! Wow, talk about securing those family values votes. This is like a bad Saturday Night Live sketch! What next…Yeh, well we knew she killed a man, but she is still under investigation so we thought it was cool.

Of course you knew this was coming:

ARE YOU KIDDING ME?!

So, my brother and I were talking the other day and I told him I had a very strange feeling that perhaps Sarah Palin was, in fact, Dick Cheney with a sex change. His answer? Can’t be, she has not shot anyone in the face yet.

To sum it all, this quote says it all for me: