There is nothing like a picture perfect weather weekend to kick off the summer. But the weather was not the only thing that was perfect. We were fortunate enough to have been invited to 3 amazing BBQs filled with good friends with our family unit firmly intact for a few fleeting days. There are so few times that we get to spend as a family now, adding old friends and their kids to the mix is truly a gift.

BBQ number one was so very special because all the 21 year olds were there, many of whom have just returned with stories of their semesters abroad. Looking at all those faces I have known since nursery school, seeing their friendships still so strong and comfortable was such a joy. These are the people we have raised our children with. We have sat through graduations, in ER waiting rooms and everything in between with this crowd. This is our Community with a capital C.

BBQ number two was the campies. This crowd is filled with our friends and their kids who have all attended the same summer camp. The kids are mostly counselors – or retired counselors – with many stories of their own to add to the legacy of the ones that we tell. So much history. A culture like no other. We truly feel like we have come home when we are with this group.

BBQ number three was with more of the home crowd. A smaller group of 3 families that have been together from the very beginning. Their kids (and dogs) are like my own and we never take for granted how special their friendship is to us. Or how amazing their cooking is.

To all our hosts, thank you so much for the great times. And to my kids, thanks for humoring us and spending some time together. Something tells me you both are beginning to appreciate the time we are all together as much as we are.

And hell hasn’t even frozen over yet.

While taking this picture on Main Street in my town a couple walked by and he said, “Hey, maybe I should go get my back waxed.”

I must say that $40 seems awfully cheap for a whole back, doesn’t it?

Is there really anything else for me to say about this that I have not already said? Please refer back to this post and this post to hear my opinion of hairy backs.

That should do it. Enjoy the rest of the holiday weekend.

The Colonoscopy: A recap in 3 acts

Act One: Scheduling the appointment

Me: Hello, I would like to schedule an appointment for my colonoscopy.

Receptionist: Oh, we have an opening on the 28th at noon.

Me: (thinking ‘an opening’ was a poor choice of words) I will take it.

Understanding that this was the Friday of a holiday weekend I figured it would be a good day to take off, and I jumped at the idea of the weight loss.

Yes I am extremely shallow.

Act Two: The pre-prep (I will spare you the actual prep because I am classier than that)

Me: What flavor Gatorade should I mix the Miralax with?

Oh, and yellow – I am not an idiot! I did the taste test and under the advisement of Jana’s boyfriend decided on yellow because he said I would get sick of the grape after the second glass.

Jana: OMG you are mixing that ENTIRE bottle of Miralax* into that Gatorade, that is like a month’s worth!

Me: Yeh, I know. I thought that is why you were going to stay at Corey’s house for the night.

You will be happy to know that after I fasted for 24 hours and had been starving for a day Gary came home and made himself probably the most delicious smelling omelette ever made on the face of this earth.

I asked him why he didn’t bake a chocolate cake right after that too.

* I would like to mention that on the side of the Miralax package it states that your stool may become soft and runny… um is that not the point of a laxative?

Act Three: Phone call with a friend after the colonoscopy was finished

Friend: How are you feeling?

Me: Not bad, actually. It was just like any other Friday at work except this time I was sedated before I got reamed up the ass.

Me: Well, now is as good a time as any for her to hear about the real world.

Daughter: Thanks Amy, I really appreciate that.

Feels like just last month that my daughter Jess finished her first year of college. And then in the blink of an eye..she receives her AARP card … such a wonderful organization with great benefits like long-term care insurance, vision plans and more.

It is true that time sure flies…but this seems particularly quick. Or did AARP mistakenly send a membership card to a 19 year old?

If you are an elementary school teacher this is a must read. If you are a parent of a child of any age, grab the tissues.

Tonight at dinner I remembered the time capsule that Danny had put together in his first grade class. This could be the single best project he did in elementary school. Mrs. Smith was his teacher and the only generic thing about her was her name. A fabulous Teacher (with a capital T) he ‘looped’ with her from first to second grade. This was the woman who recognized the fact that this little boy would spend more of his energy trying to sit than it took to do his work – so she let him stand. The same one who worked patiently to get him to read even though he had a slow start – and assured me that he was going to do fine. And of course she was right as he has become an avid reader.

Tucked away amongst newspaper front pages and Y2K party favors, custom baseball cards and a bag of 1999 coins, were some amazing artifacts, including the cover with the instructions to open December 2010. We deemed this a mistake and decided that now was the time to open it.

1. Cover of the box – notice the drawing of Franklin the Turtle in the center. 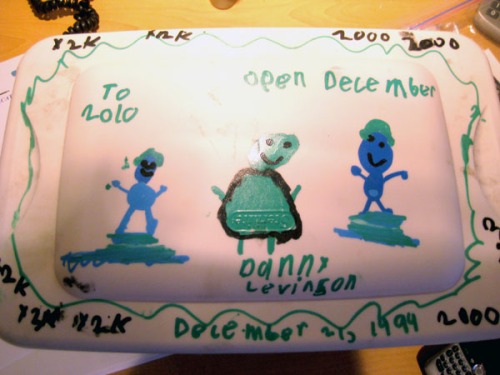 3.  A ziplock bag with the proverbial ‘the dog ate my homework’ remains – Mel got an A – and her puppy picture. 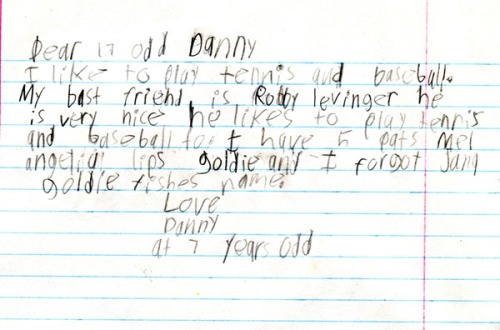 5. His predictions of the future – yes he did say that matzoh balls would still be his favorite snack food.

6. And our favorite – self portraits at 7 and 17. We love that he predicted his blonde hair would turn brown. 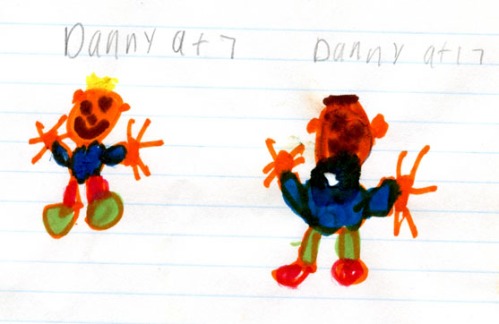 Lesson learned: don’t ever throw this kind of stuff away. And most important, savor every moment because that 10 years flew by in a blink.

Ok, so I didn’t exactly get this in my fortune cookie.

Even better, it was passed to me from across the table.

Happy Monday everyone, let’s hope for the best and prepare for the worst!

Back in the USA

After 4 months and too many take offs and landings to count my girl is back in the US of A.

There is NOTHING like having everyone asleep in their own beds.

Believe it or not there is no better sight than this: 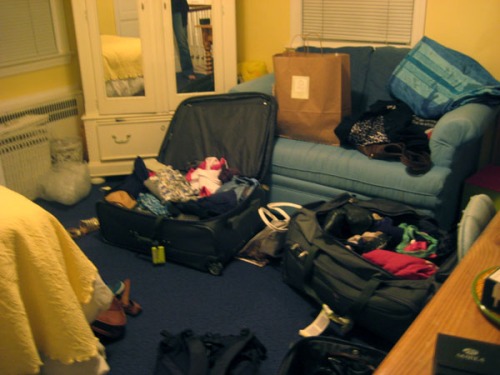