Sure signs you are not in the Greater NY area

Correct me if I am wrong, but I don’t remember ever seen signs hanging side by side for both a Rifle and Chainsaw raffles. Why is it that the only thing I can think of when I see chainsaw is the Texas Chainsaw Massacre

In my neck of the woods, raffle prizes differ slightly. 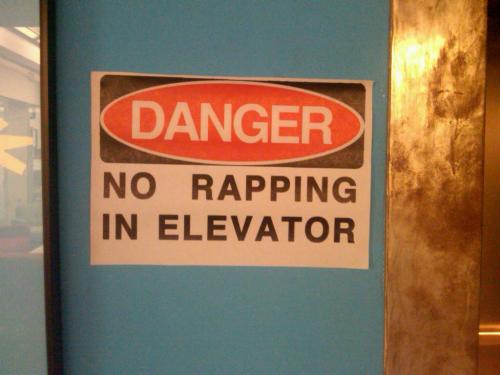 Another great shot from my friend Sue. The same one who brought you Social Media Explained from a bathroom stall. I am convinced she hangs in the most interesting buildings in NY. Hey Sue, were these in the same building?

So, let’s think about this sign. What are the dangers of rapping in the elevator?

1. Perhaps you would make someone angry enough to cause a fight.

2. You could become so engrossed in the act of rapping that you would press all the wrong buttons causing the elevator to malfunction. (unlikely)

3. Or maybe the building hipsters just thought this was funny.

Now even a mundane elevator ride or a visit to the bathroom can be amusing. Nothing bad about that.

It is a mortal sin?

Here is another famous picture from my morning walk. I did not realize there was someone in this car until after I took this picture and started walking again.

Yes, I am a little concerned that one day someone is going to be less than thrilled that I am taking a picture, but till then I will continue to be unusually ballsy.

I posted this on facebook and found out from my old friend Brian, who owns a surf shop, that this is actually a sarcastic bumper sticker made by skaters.

That makes it ten times better, don’t you think?

Night of the Living Undead

Here is quite a story out of South Africa today. Apparently a man was in the morgue for 21 hours who did not exactly qualify for the spot he was taking up. It seems the old fella was simply NDY (not dead yet  for all you Monty Python fans out there).

As reported by the NYT and sent to me by Dani G, “Morgue owner Ayanda Maqolo said he sent his driver to collect the body shortly after the family reported the death. Maqolo said he thought the man was around 80 years old. When he got there, the driver examined the body, checked his pulse, looked for a heartbeat, but there was nothing.”

It seems after almost a full day and a good long frozen snooze, the poor guy woke up and started screaming for help. Must have been a fun night in the morgue! The owner called the police – just in case, you know, it was a zombie or something.

The guy was reported to be pale (really? how shocking. I think that might have been a little freezer burn) and asked how he got there. What? You don’t remember your family deciding you were dead and putting you on ice. I surely would be looking over my shoulder for a while after this incident. I certainly would not be falling for that old could you go get me a steak from the walk-in freezer trick.

Honey, is grandpa dead again? Yes, I do think so, this time let’s hit him over the head with a frying pan just in case before we call the funeral home.

It was reported that the family was told he was alive while meeting to make funeral arrangements. They were said to be ‘happy to have him home.’ 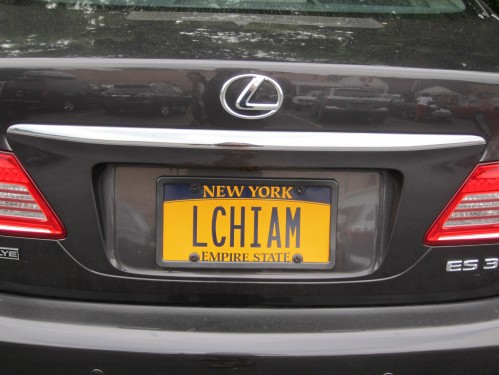 For those not of the tribe, L’chiam means ‘to life’. A lovely phrase that I guess I never really thought all that much about. It always felt like one of those boilerplate things you would say when making a toast. Or the lyrics to a song from Fiddler on the Roof.

When I saw this car in a parking lot I got to thinking what a nice philosophy it is. To Life. A grateful sort of appreciate every moment thing.

I also thought it would be pretty rough driving this car in the deep south.

The second thought was my Woody Allen complex kicking in.

Tagged as Fiddler on the Roof, license plates

Once again, the universe dropped a big helping of ridiculous on my plate. I could not believe my good fortune that this couple should cross my path just as I was taking the first draw off a really kick ass smoothie from Joni’s. I live for these smoothies and only wish that Joni would open a place closer than the 2.5 hour drive to Montauk (on a good day).

So these two? Did they wake up in the morning and say, “Hey, let’s wear our I Heart NY t-shirts to the beach”? Or was it a coincidence? I think not.

Way to work as hard as you can to look like a tourist.

I give these two the What the Hell Were you thinking award this week. 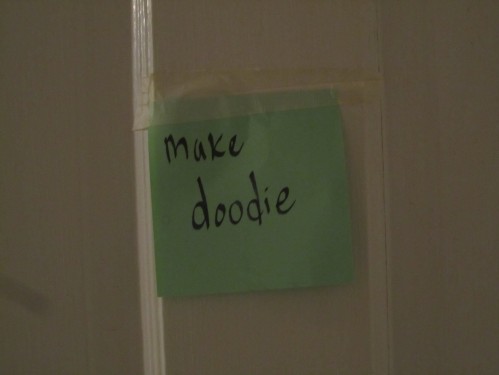 We came home the other night from a weekend away to find this sign on the bathroom. It was obvious that Jana had some friends over while we were away.

What I love about my kids’ friends is not only do they totally get my sense of humor, they spontaneously leave me notes in the oddest places. Thank you, Kate, for reminding us what we need to do and where to do it.

In the past I have also found notes in the cupcakes and a signed banana in the fruit bowl.

For those who were concerned that I dropped off the face of the earth for a few days… I’m still breathing.

I was off the grid for the weekend, soaking in the loveliness of Montauk and did not feel compelled to post. Although I did take a million pictures that you will surely see here and on the newly resurrected Leaving the Zip Code.

(disclaimer: this was a sticker on the back of a road sign that made me laugh and by no means makes any reference to the Katie Perry song. Cuz, you know, I am more of a Patti Smith sort of girl than a Katie Perry one).

And the Lorena Bobbit Award Goes to…

Catherine Kieu Becker, the woman who drugged her husband, tied him to the bed, cut off his penis, dumped it in the garbage disposal and turned it on.

The dumping was unusually harsh; I mean didn’t Bobbit through it out the window? At least there was some hope for being ‘reunitied’.

When asked why she said, “He deserved it.”

When my kids were little and some ‘crime’ had been committed I used to ask them what happened right before they were served with some injustice.

I certainly would like to know what the hell this guy did right before his wife decided to grab an knife and cut of his package.

People Got the Power

Patti Smith at Castle Clinton on a perfect summer night. Nothing like a free River to River concert. This joyous soul made it worth not getting tickets inside the castle. There were speakers outside and the vibe could not have been any more fun than inside the venue.

People Got the Power…

Filed under carry a camera, music