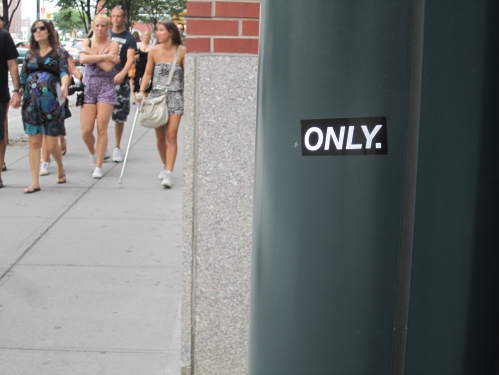 File this under ALWAYS carry a camera. This sticker was on pillar of a building on Houston Street. I took a shot with my phone and posted it to facebook, but right after that I got a shot with my camera with these people walking by that made it even more interesting.

After a little Googling I found out that Only. is ‘an independent brand based out of the West side of Manhattan that offers quality goods, released in limited quantity.’ You can find out more about them here.

Cool brand, cool stuff but I am still more excited about the intrigue they created with this sticker. So I will pose the question here that I asked on facebook:

1. . (I believe that was a typed period… very creative and very literal)

3. The lonely… (love this one… I am huge Roy Orbison fan)

So? What is your answer?

Filed under carry a camera

If I had eyes in the back of my head…

I would have told you that you looked good as you walked away. – Jack Johnson

Could good ole Jack have know about Wafaa Bilal, the NYU photography professor that is having a camera surgically implanted in the back of his head?  Yes, you read that correctly. Seems Mr. Bilal has been commissioned by the government of Qatar to partake in an art project called ‘The third I”. It is intended as “a comment on the inaccessibility of time, and the inability to capture memory and experience,” according to press materials from the museum. Um… ok.

The camera will take pictures at one-minute intervals and will stream to a computer database. It will appear in different sequences on monitors in an exhibit between December and May.

Anyone find this just a little too over the top. First of all, ouch! I mean how does one surgically implant a camera in the back of someone’s head? Apparently through a piercing device. Ouch, again. And really, what happens to this guy’s personal life? I can’t help but think that half the time there will be streaming video of his friggin’ pillow while he is sleeping. Then there are the hours that he is teaching when he promises to put a ‘lens cap’ over the camera. I am guessing that would cut into the hours too. What if he really boring and most of the images are of the wall in his apartment?

This guy is known for some wacky antics in the name of art. I suppose his thing is pushing the edge. I mean look at that expression in that picture… this guy has nut written all over him.

Hey, I am all for conceptual art. I love a good performance piece. I am a huge fan of streaming video. Hell, I watched the puppy cam for hours last year. But this one? The idea of the surgical implant is just a bit more than I am willing to accept.

Then again, what parent has not wished they had eyes in the back of their head? Who knows, we may see them recommended on cool mom picks next holiday season. 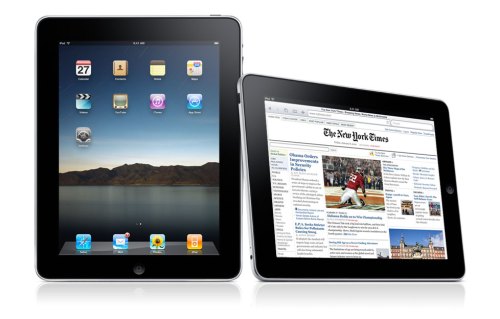 My Brother: So, are you going to get the iPad?

Me: Nope, not the first generation. It doesn’t have a camera, doesn’t support Flash and has no memory.

Can’t make this stuff up.