Spotted What? (you may want to see a doc) 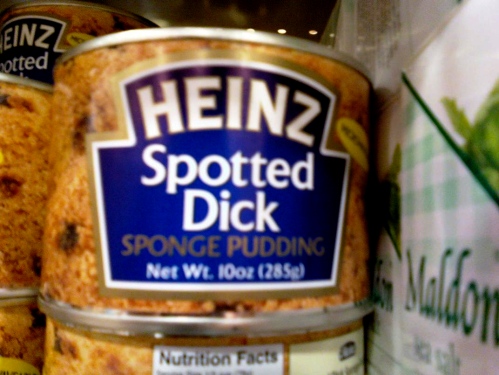 Once again, a happy reader sent me a photo I could not resist. That makes 3 in the last week. Hmmm, I think this trend is catching on. If there were ever a mission statement for this blog it would be: Carry a camera and notice the amusing things around you in everyday life. Except if it were a mission statement it would be a ridiculously long run-on sentence that would have been belabored around a conference table for months on end (yes I have sat in meetings like that and am having a big kill me now flashback thinking about it).

Gary calls my readers my private blog satanic worshipper friends (nice, huh?). Well, this one I can vouch for because I actually used to walk to elementary school with her and recently reconnected. So, thanks Fran, love that you thought of me in the Wegmans in Ithaca.

On to the post. This, my friends, would be a 10oz can of some tantilizing Spotted Dick. Yeh, I know, sometimes you just wake up in the morning and think, ‘what the hell am I going to do to satiate this mad craving for some Spotted Dick.’ Or maybe you wake up and say, ‘Damn, I better get some cream for this Spotted Dick’ if you are a man. And if you are a woman you would be saying, ‘Was I really that drunk or did that guy have a Spotted Dick? I better see a doctor!’

Ok, now that I have gotten that infantile behavior out of the way, let me share with you all what canned Spotted Dick actually is when you find it in Wegmans in Ithaca in the UK aisle. The UK aisle? What the hell? Do you have one of those in your supermarket? Ok, well according to Wikipedia (what did we do before the Wiki?) Spotted Dick is not actual a polka dotted penis at all. Nope, as the can says, it is ‘sponge pudding’ with currents or other dried fruit (being the spotted part) and the word dick being a contraction or slang of sorts for  ‘pudding’ (huh?) or ‘thick’ (makes more sense) because the pudding is thickened.

Yeh. K. I get it. And I am sure my friends who are in the UK like Janet from Facebook think I am a pathetic dweeby American but really folks, you have to admit you are all thinking you might need a can or two of this on your shelf just for the laughs when you go into the cabinet. It would make a lovely addition to any gift basket as well. Just giving you some ideas for how to bring a little Spotted Dick into your life. Think of me as the Martha Stewart for the Absurd (Neal that would be the MSFTA).

I like to stay consistent with the childlike behavior if you don’t mind.

Gotta go, have to spoon up some Spotted Dick for Gary when he gets home from tennis. We’ll see who has satanic worshipping friends…

Filed under absurdities, carry a camera