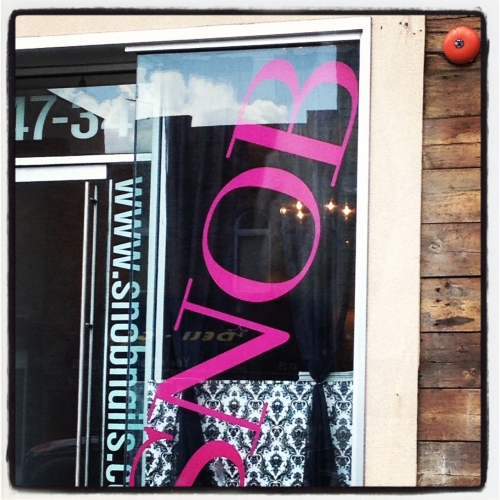 I passed this place the other day in Long Island City. If you are not from the area you would not realize how funny that is. LIC is just across the river from Manhattan; but a short while ago there was nothing about the area that would make you think that an upscale, slightly-affected nail salon (understatement) called Snob would crop up. It is amazing how one minute a neighborhood can be all industrial and sketchy and before you know it you can get a mani pedi at a place called Snob.

I sort of wanted to hang around and see what type of person was OK with frequenting a place called Snob. Do you think they have shopping bags with their logo on it. I would SO love to have one of those.

A quick little hop over to Yelp yielded a slew of 4 and 5 star ratings and a nice sound byte: For a place called “Snob”, they have a very friendly staff! But there was one patron who was very unhappy with her brazilian wax and got way more graphic with TMI review.

Hey, do you think they sell t-shirts?