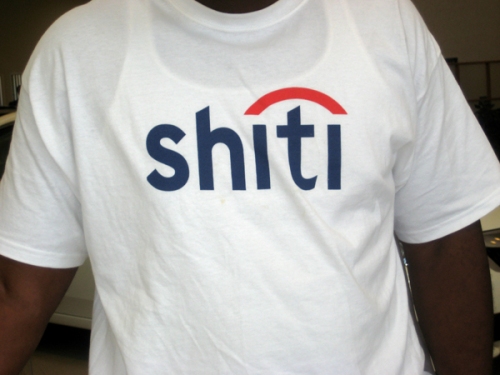 Was it a coincidence that I saw this guy today? The same day that the above the fold story in the NYT Business Section was titled U.S. Weighs Action of Citi’s $100 Million Dollar Man.

This article outlined the absurdity of the situation. In a nutshell: bank falters and threatens to go under, government bails them out to the tune of $45 billion, bank honors a contract to pay one guy $98 million and another a dwarfed $30 million in comparison.

Do we not think this might piss perhaps a FEW people off?

Ok, I may be grabbing at straws here but if this guy is ‘worth’ $100 million now isn’t it safe to say he has been banking a ton of dough over the years. What’s he worth? (and who really cares). Point being, is it not worth it to lay down on the big bucks to keep yourself from looking like the biggest pig on wall street (which is quite a feat)? Exactly how much is enough?

My thought? the whole thing is pretty Shiti.

Oh, and New York Times, you have an error in the 5th paragraph, first sentence. The word ‘that’ is in there two times. You must have been focusing on the correct spelling of ameliorate in that same sentence.